On November 21st, I had the privilege of hosting a sold out crowd at my
most recent Manitoba Collaboration Project concert – “Jota”.  It was a pleasure to collaborate with pianist, Madeline Hildebrand, whose charisma and musicality was amazing.
Working with such a force at the keyboard was so satisfying – the first of many concerts with this fine musician, I’m srue!

The evening was a musical and culinary tribute to Spain, and what a tribute it was.  Of course, travelling to Spain wasn’t without its layovers in other countries – we started in France (Bizet, Debussy & Ravel), detoured to Argentina (Ginastera), and spent a little time in Italy and Austria (Rossini and Mozart), but eventually landed in Spain with De Falla – the trip was exciting and the stories we told were rich with character and color.

Transforming a home into a concert

venue was as fun as always, and we were lucky enough to have a beautiful Essex Grand delivered for the event, making it a very special concert indeed.

The evening ended with Tapas and dessert – catered by my go-to chef, Pauly Grace, an artist in her own right. The Spanish-inspire menu was amazing – thanks to Pauly and her daughter Chelsea for taking such good care of us, leaving us well fed, and that much closer to the true Spanish EXPERIENCE!

Looking forward to many more collaborations with fellow Manitoban Artists as part of what is seeming to become a tradition – the Manitoba Collaboration Project! 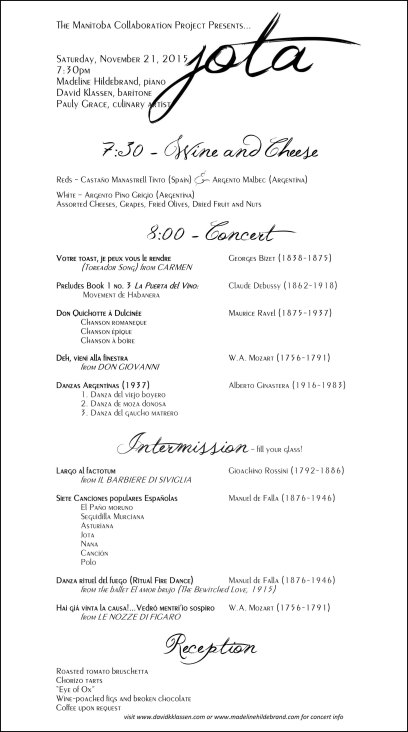 One thought on “Jota!”